Last week I signed up for a Buzz Campaign.

Yep - Pork and Beets is what I made and I am looking for a bit of recipe help.

So I made pork loin last weekend (before I knew of this campaign) and I had a chunk I still needed to use up.  Chunk equaling about a pound or two of meat.  I also had 3 red beets I purchased simply to experiment with since I had never cooked beets.  Mix this with two glasses of Kitchen Sink - Moscato and a boring Sunday afternoon and you get Pork and Beets.

The pork was cooked in my slow cooker with onions, a bottle of hard cider, salt, pepper and roughly two cups of water.  Note - I have an 8qt slow cooker, so it can handle a larger cut.

I already made two dinners with this pork loin,
1) pork and kale which was quite yummy but remains "un-blog-umented" - I will make again in the future, and
2) simply pork with mash potatoes and veggies.

Being I was bored and drinking wine a cooking adventure was bound to happen.  I had read a few recipes on beets, which included various boiling and peeling etc.  which I decided to simplify.  I trimmed the ends and peeled them with my veggie peeler and cut them in to thin strips - not quite julienne but small.  I put them in a pan with the juice and onions from the pork and let them simmer until soft. Then I shredded up the pork and added that to the beets.  Salt and Pepper.  Voila it was complete.  Now the issue I have is that while it is good, I had this confirmed by the Hubby, who after expressing initial skepticism liked it, but we both agree it could use something to give it that extra oomph.. 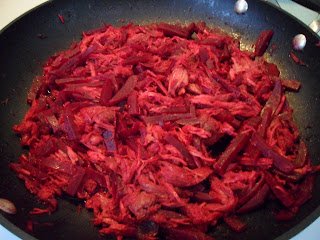 Beets are naturally sweet so I am thinking I need to add something from the spicy/tangy pallet.  I am torn between vinegar based or chili based.  I want to keep this dish healthy and flavorful.

I look forward to receiving your input.

FYI - with the deep red color I am sure it could be tweaked for a Scary Halloween Meal.

Fun recipe! It would be a scary one for Halloween!