What do Nerds do on a Starry Saturday Night?

So I mentioned in a previous post that I went to see the Nerdist Podcast show at the Variety Playhouse in Atlanta (Little 5 Points to be precise).

Now I will admit this was not my idea.  My daughter - The Future World Renown Writer aka The Younger One heard that Chris Hardwick and troupe (Matt Mira and Jonas Ray) were coming to Atlanta to do the Podcast and was determined that we should go.  She even bought us both tickets. (How many kids do you know that want to take their mom to a show on Saturday Night.  :)  She loves me and yes we are Nerds.)

For those that don't know  The Nerdist  is nerd comedy at its peak.  Take Big Bang Theory meets American Pie- oh and definitely a mature audience only kind of show.  If you are a fan of Star Trek, Dr. Who or the Walking Dead this is the place for you. (I can only claim two of the three shows as Zombies just don't do anything for me.)

We started the evening at the Brew House as there is no better place to people watch in Little 5 Points, which as Chris so aptly pointed out in his intro is the Haight-Ashbury of Atlanta - it is an Alternative Haven and one of my favorite places in Atlanta.  However, we were unable to get a table outside and ended up in the cover seating area.  As we perused the menu we notice the couple at the next table - who should it be but TLC's Chilli - like I said best place to people watch.  (We did not take any pictures but let them enjoy their meal.)  I will say she is a beautiful woman and Usher was a fool to let her go - although her companion was definitely no slacker.

After we finished gawking and had dinner we walked over to the play house stopping at a few of the stores and enjoying the street performers along the way. 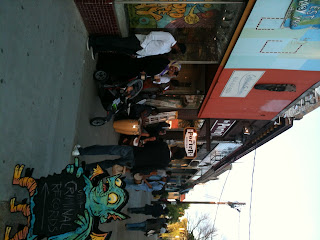 We got to Theater and took our place in line.... 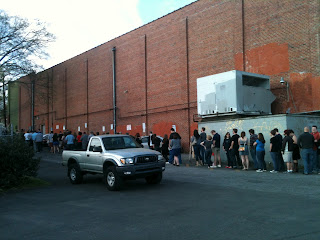 We even had music to keep us entertained while we waited. 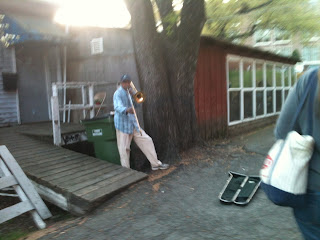 Before long we were seated in the glory of purplish blue velvet waiting for the show to begin. 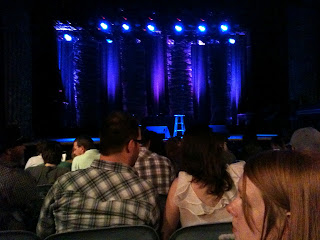 The show consisted of a stand up comedy portion, then the podcast portion followed by a Q/A portion called  QUEMMENT!   I was too busy laughing to take pictures during the show however, after entertaining us for 3ish hours they were so kind as to let everyone line back up to get autographs and take pictures.  We had a great time as you can see from the pictures.

Picture of The Younger One with Chris, Matt and Jonas 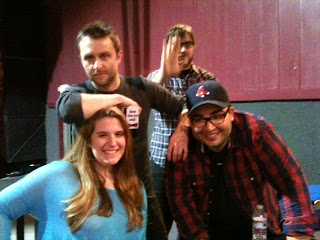 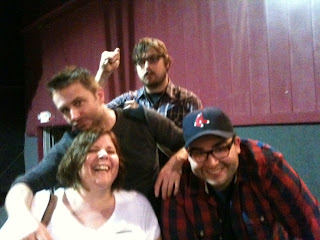 Me laughing at all the silliness and the fact it was way past my bedtime.

If you watch the promo specifically Chris's portion you will hear all of us yelling in the back ground... That's right he filmed it in Atlanta.

Check out the show and let me know what you think.

**If you should be so fortunate as to enjoy an event at the Playhouse try the coffee.  Best cup of Joe I have had in a long time.