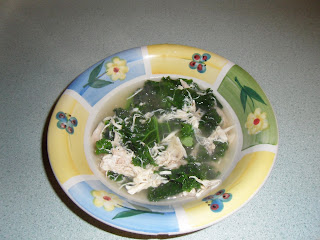 So it has been awhile since I last posted. I have been having an enjoyable time living in the NOW, at times just trying to keep up felt like a better description. So this morning I was to wake up and participate in a 5K fundraiser for a friend's charity when the Universe stepped in with a different plan. I woke with a head and chest cold, a day of rest was determined. Truth is I am a terrible patient, as I tend to get bored. I played on the computer, did some laundry and finally decided to cook something as I find cooking an enjoyable creative outlet.

Chicken Soup seemed to be the call of the day so I cooked a cut up chicken for about an hour and then let it cool on the stove.

Now what to put in my soup, well Kale seems to be the veggie of the 2012. Everywhere I look the merits of Kale are being touted, juicing seems to be the biggest buzz word, however, I like to eat my food not simply drink it mashed up. So to keep my soup in the low carb category I opted to add Kale instead of rice or noodles.

(back to cooking)
So while I de-boned and shredded the chicken, I let the broth simmer (I added some Knorr's chicken stock, rosemary, celery salt, salt and pepper to the broth).

I added back the shredded chicken and finally tossed in about half a bag of kale. I let this simmer for about 7 minutes and then it was time for soup.

My husband after an initial skeptical look devoured his bowl and declared it was really good as he headed for a second serving.
Posted by Unknown at 8:06 PM No comments: